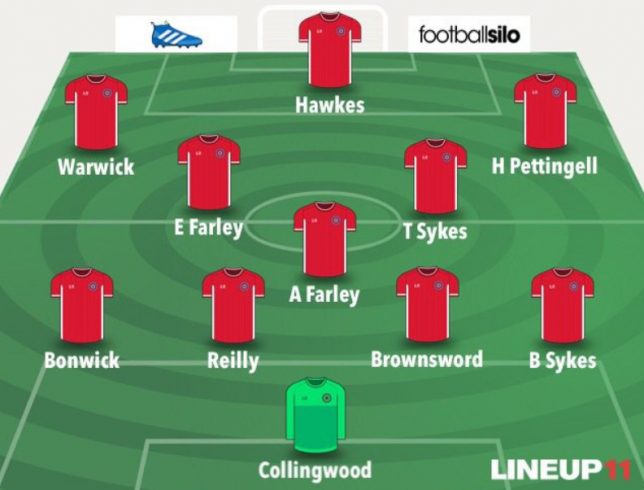 Long Crendon extended their 100% record with a hard fought 2-0 win over Aston Clinton Development on a rain-sodden Saturday.

Archie Pettingell was unable to recover from the shoulder injury he suffered against MK Wanderers and Tom Lethbridge was away, meaning there were recalls for Eliot Farley and James Hawkes.

While the pitch looked in great nick, the greasy surface led to a fair amount of overhit through balls and a number of attacks broke down in this way. Crendon were largely in control of the game without ever being at their flowing best. Both Christian Warwick and Harry Pettingell were threats down either wing but Aston Clinton defended resolutely against the resulting crosses and generally frustrated the away side.

Hawkes was his usual aerial threat from set pieces and forced a brilliant save from the Aston Clinton keeper, before being frustrated again when the keeper saved again from him at point blank range. By this stage, Crendon were noticeably getting irritated but they were handed a boost when Harry Pettingell streaked clear, only to be hauled down by John Sullivan. A clear red card for denying a goalscoring opportunity and Aston Clinton were down to ten men. Crendon almost immediately rammed home their numerical advantage by producing their best bit of football of the match – a lovely, flowing move that reached Tom Sykes in the box and he delayed perfectly to lay the ball into the path of the onrushing Dino Bonwick, who drilled home in style. Warwick had an appeal for a penalty turned down right on half time as he was bumped in the back when lining up a shot but the referee waved away the appeals.

Crendon might have expected to come out and dominate the second half with their extra man, which they did, but it proved to be a slightly disjointed half of football. Aston Clinton retreated to the edge of their box and defended with great heart, soaking up sustained periods of Crendon pressure. Both Eliot Farley and Hawkes tested the keeper with powerful shots that he was equal to and another Hawkes header went over. There was always the fear that failing to kill off the game could cost Crendon and George Collingwood was forced into one sprawling save but overall the defence was screened superbly by the cool head of skipper Alex Farley and the back four was once again on miserly mood.

On 87 minutes, Crendon finally made sure of the points. Alex Farley’s deep corner made its way to the late arriving substitute Scott Hardy and he produced a controlled volley with his very first touch and wrap up another win. A solid, rather than spectacular, win but the sort that you need to grind out over the course of the season. The win maintains Crendon’s unbeaten start and sees them go into next week’s cup tie against Hellenic Premier Division side Shrivenham in great heart.