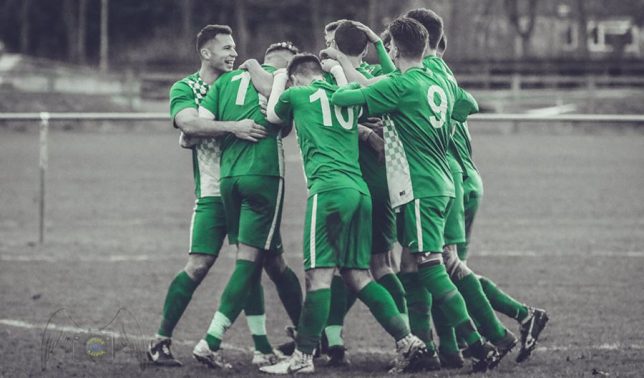 Long Crendon recorded a fourth straight league win with a convincing 3-0 win at local rivals Thame Rangers Development on Saturday. For the first time this season, Gerald Reilly was able to name an unchanged side for the game and the team responded in perfect fashion.

It was clear from the opening stages of the game that the sticky pitch was going to make it an attritional affair. In addition to this, Crendon were playing into the wind and the first twenty minutes passed with little goalmouth activity. James Hawkes was a lively presence on the left wing for Crendon and one particular burst down the flank and whipped cross warmed the watching Crendon supporters but ultimately Thame smuggled the ball away. Just after the half hour, Eliot Farley shot over after a good move and Crendon then had a goal contentiously disallowed when Oli Lethbridge fired home from a corner, but the Thame keeper was adjudged to have been fouled.  However, Crendon had gradually begun to assert their superiority and this was reflected in the scoreline when Oli Lethbridge was fouled in the box and Nathan Brownsword tucked away the penalty to open the scoring in the 37th minute.  Thame’s best spell came in the last five minutes of the half when they won a series of free kicks, the most dangerous of which saw a vital headed intervention by Eliot Farley at the back post.

The opening goal certainly seemed to have settled any Crendon nerves and from the start of the second half there was a greater confidence in possession and Thame were becoming more stretched at the back. Skipper Alex Farley handed Crendon a slight scare when he went down with a knee injury but he was able to run it off and just before the hour mark, Crendon doubled the lead. Thame were caught in possession in their own half and Hawkes, who had looked as dangerous as anyone on the pitch, produced a lovely cutback that Oli Lethbridge slotted home to the keeper’s left. To their credit Thame attempted to muster a response but the main threat continued to be set-pieces and after one goalmouth scramble saw a great block from Tom Lethbridge, they struggled to create for the remainder of the game.  Their task became even more difficult when Andrei Petru was red carded for following through on George Collingwood and Crendon proceeded to wrap up the game when Oli Lethbridge was brought down in the box and stepped up himself to make it 3-0. Further gloss could have been added to the score line when Hawkes headed just wide from a corner and Oli Lethbridge could have completed his hat-trick but fired well over with his left foot. However, the damage had been done and a fine all-round team display sent the team top of the league, albeit with more games played than their rivals.