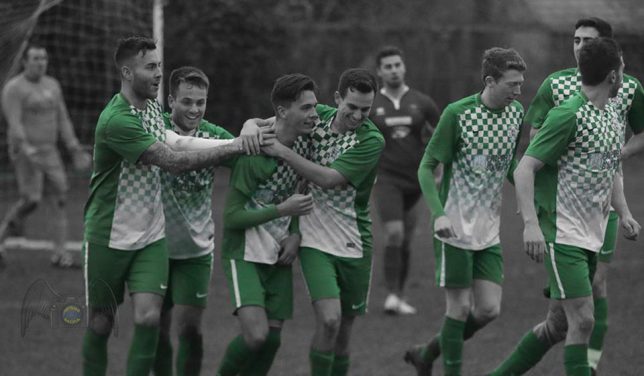 Long Crendon made it five straight wins after a second half blitz saw them record a 4-0 win over a stubborn Virginia Water side.

For the third game in succession, manager Gerald Reilly was able to name an unchanged squad, with captain Alex Farley shaking off a knee problem to retain his place in midfield.

The first half was a tight affair, with Crendon generally holding the ascendancy in both territory and possession but Virginia Water, lining up in a 3-5-2 formation, were proving a tricky side to break down.  Crendon’s main threat was carried down the right where Harry Pettingell continually got the better of his marker but the final ball was elusive.  Both Eliot Farley and Oli Lethbridge had opportunities after good work from Pettingell but on both occasions Waters defenders or the goalkeeper were on hand to block the shots. The closest Crendon came before the break was when James Hawkes climbed well from a Tom Sykes corner but his header was cleared off the line, while at the other end George Collingwood made a smart stop with his legs to ensure Crendon didn’t fall victim to a sucker punch.

The second half began in similar fashion with Crendon out of the traps fastest and they were inches away from taking the lead when Harry Pettingell’s cross shot was tipped onto the post by the goalkeeper and somehow scrambled behind.  However, on 57 minutes, the deadlock was broken – Alex Farley swung in a corner from the left and his brother Eliot was on hand to force it over the line at the second attempt.  The goal came just as Crendon might have started to get frustrated and with Tom Lethbridge and Nathan Brownsword in imperious form at the back, the result never looked in doubt from then on. The lead was doubled with a quarter of an hour remaining, when Hawkes, who was far more in the game after the break, crossed for Oli Lethbridge and he produced a lovely touch and finish to make it 2-0. That seemed to kill off Waters’ remaining defiance and it was soon 3-0 when Hawkes shot under the keeper’s body to register his sixth of the season before substitute Archie Pettingell slotted in a fourth to complete the perfect day for the home side and see them remain top of the table.

We make it six straight wins in November to move up to fifth in the table. Horrible conditions but we did a professional job without playing as well as recently.

This week sees us away to Burton Park Wanderers!